After the opening ceremony in the charming setting of the Porto Vecchio in Alghero, Lago di Baratz welcomes today the 240 archers from 29 countries for the first day of elimination rounds. 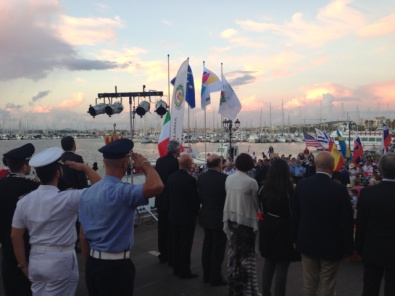 Everything is ready. The first arrows of the World Archery 3D Championships organized by the local team Arcieri Torres Sassari will be shoot today.
After the opening ceremony in the charming setting of the Porto Vecchio in Alghero, Lago di Baratz welcomes today the 240 archers from 29 countries for the first day of elimination rounds.
Three courses done with 24 pitches will challenge the archers of the four divisions.
Compound will shoot on the blue course, while the green one is hosting the long bow men and the instinctive and bare bow women specialities. On the red course women with long bow and men with instinctive and bare bow are contending. For the first time the archers of instinctive and bare bow are competing on the same course, facing the same difficulties. The team is composed by the best compound and long bow archers and a third one chosen between instinctive and bare bow.
The courses are rather short. Each of the 24 pitches […]. The groups have been drawn in a way that allows no archers of the same nationality to belong to the same group of four. Distances are unknown, with scores of 11, 10, 8,5 or miss (standing for 0).
After the parade that presented the 29 contending countries in Alghero and the greetings of the local institutions, the World Championship has officially begun.
The count of the scores from today’s and tomorrow’s qualification rounds will define the ranks for the team matches and for the individual elimination round on Friday in Lago di Baratz.
Later, all the participants to the event will move to Parco di Baddimanna in Sassari, to compete in the semifinals and the finals on Saturday, that will be shown on Rai Sport 1, from 16 p.m. to 18 p.m.