En plein for Italy in the World Archery 3D Championships

It is almost an en plein for Italy in the ongoing World Archery 3D Championships at Lago di Baratz. 23 out of 24 Italian archers passed the qualification rounds and achieved access to the next turn. 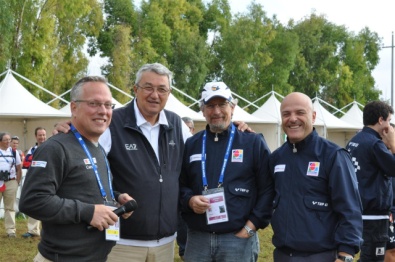 It is almost an en plein for Italy in the ongoing World Archery 3D Championships at Lago di Baratz. 23 out of 24 Italian archers passed the qualification rounds and achieved access to the next turn.

In compound, first place for the American star Dave Cousins (1029), in front of Tursic from Slovenia and Mustapic from Croatia. Among the Italians, Antonio Pompeo (sixth) and Raffele Gallo (eleventh) made it to the next turn.

Concerning women, the world champion Lucy Holderness (971) is at the top of the ranks, in front of the French Coupron and the Italian Sonia Bianchi (938).

The fight has been very exciting in bare bow, the world champion Bobby Larsson dominated with a score of 927 in front of the two Spanish archers Garcia and Juanola and the Italian Giuseppe Seimandi, 4th with 898 points. Ferruccio Berti (884) and Alessio Noceti (880) are 6th and 7th. The Italian Cinzia Noziglia recoups two positions with 430 points, ending the qualification rounds at the top of the ranking with a total score of 840, in front of the French Porte and the Swedish Nilsson and Bjorklund.

In the longbow, the Czech Tomas Hanus ends first with 829 after two days of high level archery. Behind him, the Belgian Verrier and the French Corvino. The world champion Paolo Bucci is 4th with 771 points. Giulia Barbaro dominates women reaching the top already after the first 48 arrows scoring a total of 756 points, 27 points ahead of the Spanish world champion Lazaro Garrido (729). In instinctive Enzo Lazzaroni is second with 873 behind the Hungarian Ferenc Molnar (906).

Among women is still Hungary that dominates with Szilvia Toth Molnarne (731) in front of the Austrian Ocenasek, the world champion, and the Italian Francesca Capretta (700), silver medal at the world championship in Austria two years ago.

The best archers of each division are competing today for the last sixteen with twelve pitches and only one arrow for each target. In the afternoon, the last eight will draw the archers that will make it to the semi-finals in Parco di Baddimanna in Sassari (live streaming on Rai Sport 1 from 16 to 18).