The stunning final rounds of the 3D World Championships in Sardinia crown Italy as the first nation of the medal standings (3 gold, 3 silver and 3 bronze medals), followed by France and Austria with 2 gold and 1 bronze medals 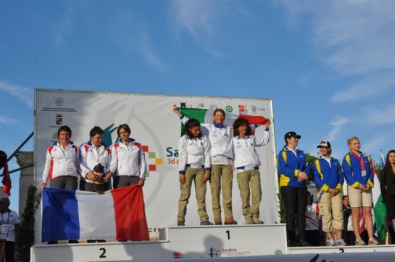 TEAM FINAL ROUNDS - MEN
Denmark has won the gold medal competing with the Hungarian team (102-93). The 3rd place goes to the Spanish team, that has overcome the Italian athletes (Bucci, Seimandi, Pompeo) with a final score of 107-101. TEAM

FINAL ROUNDS - WOMEN
The women team final rounds report the great performance of the Italian athletes against the defending champions (France, featuring Courpron, Cluze and Porte): Giulia Barbaro, Sonia Bianchi and Cynthia Noziglia, after a good start (25-21), set a score of 48-47 at the 2nd pitch, overcoming the French team that, instead, get them ahead in the 3rd pitch (77-74), before the final Italian come back, closing the match at 103-101. Sweden has got the 3rd place, winning 97-91 with the Austrian team.

INDIVIDUAL FINAL ROUNDS
In the compound men final rounds, Dave Cousins (USA) lives up to the expectations, winning the world title against József Csikós (Denmark) with a final score of 44-38. The Danish team has won also the bronze medal with Stig Andersen, who has defeated (43-37) his Italian opponent, Antonio Pompeo.
After losing the 1st place in the team competition, Deborah Courpron (France) gets her redress in the women individual final rounds, winning the gold medal against Sonia Bianchi with a final score of 41-34. An Italian athlete of the ‘Fiamme Azzurre’ team, Irene Franchini, wins the bronze medal, defeating Simona Mazzali in an internecine match, ended with a final score of 37-28.

In the barebow men final rounds, Giuseppe Seimandi fails his second world title after the one he won in 2007. The athlete of the ‘Fiamme Azzurre’ team has been defeated by the Spanish champion, David Garcia Fernandez, with a final score of 37-31. Richard Kocourek (Czech Republic) wins the bronze medal, beating (42-39) his Swedish opponent, Bobby Larsson.
In the barebow women final rounds, the Italian team stands once again on the top step of the podium: Gloria Villa fulfills her debut in the national team with an overwhelming performance, defeating her Swedish opponent, Jessica Nilsson, with a final score of 39-24. Luck is not smiling back to Cinzia Noziglia, instead, as she has failed the bronze medal in the tie break against Lina Bjorklund (Sweden): after scoring a thrilling 31-31 at the end of the four pitches, they have both hit the 5 at the decisive arrow, but the shot of the Scandinavian archer was closer to the center (called ‘Perfect’) than the Italian one.

In the longbow men final rounds, Giacomo Luca Fantozzi cries tears of joy. After an exciting challenge, the Tuscan athlete has won against his Czech opponent, Tomas Hanus, with a great final score of 31-28. The bronze medal is still Italian, as Marco Pontremolesi has overcome by a narrow margin (26-24) Jozsef Molnar (Hungary).
France dominates also the longbow women final rounds: as a matter of fact, Sophie Cluze has won the world title against Giulia Barbaro (Italy) with a final score of 29-26, snatching the gold medal from the Italian archer, that was very close to her third world title in the individual competition, after winning in 2005 and 2007. The bronze medal goes to Estonia, after Ylle Kell has defeated Josefine de Roepstorff (Denmark) at the tie break arrows (13-13, 11-10).

In the instinctive men final rounds, the final challenges have been a ‘teammate matter’: Wolfgang Ocenasek (Austria) has won (32-29) the gold medal against his fellow countryman, Alexander Parschisek. In the internecine head to head match for the bronze medal, instead, Giuliano Faletti has defeated (32-29) his teammate, Enzo Lazzaroni.
The Austrian team dominates also the instinctive women final rounds, with Christa Ocenasek standing on top step of the podium, after beating her Norwegian opponent, Nina Andrea Standerholen, with a final score of 37-28. In the bronze medal match, instead, the defending World vice-champion, Francesca Capretta, has been overcome (29-26) by Inmaculada Garcia Jimenez (Spain).